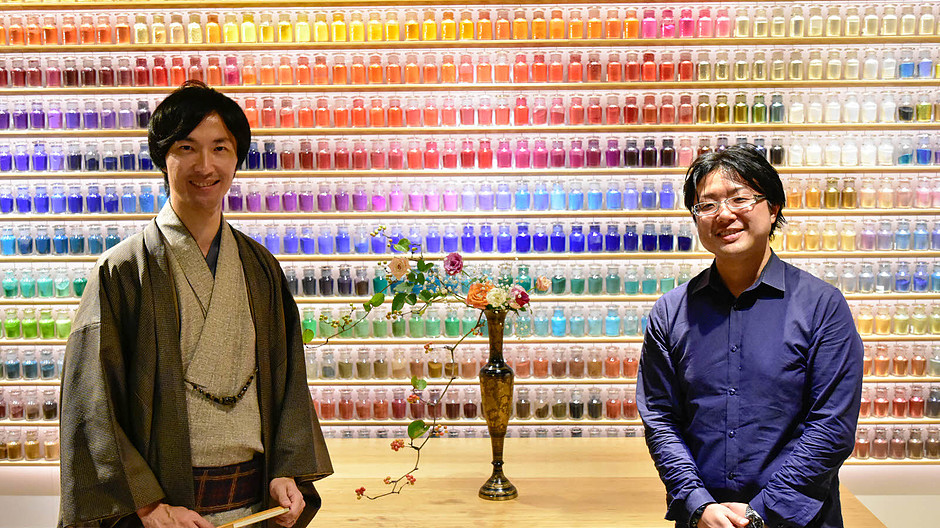 “The Story of “Colors” in Ikebana” Event Report

Have you ever heard of “art thinking”, that has attracted much attention from business recently? Different from the traditional data-driven business models, art thinking pursues potential “intuition” and “aesthetics” in each individual. Because of its expertise, however, some people may wonder how they can practice their aesthetic thinking.

Therefore, this time, PIGMENT TOKYO held a series of talk session “PIGMENT COLOR PHYLOSOPHY”, to understand art-thinking by cultivating aesthetics of your own. Our very first session was held in October 24th, hosted by Kei Iwaizumi, the chief of PIGMENT, and we invited Ryuho Sasaoka, the Head of the Mishoryu-Sasaoka Ikebana School. 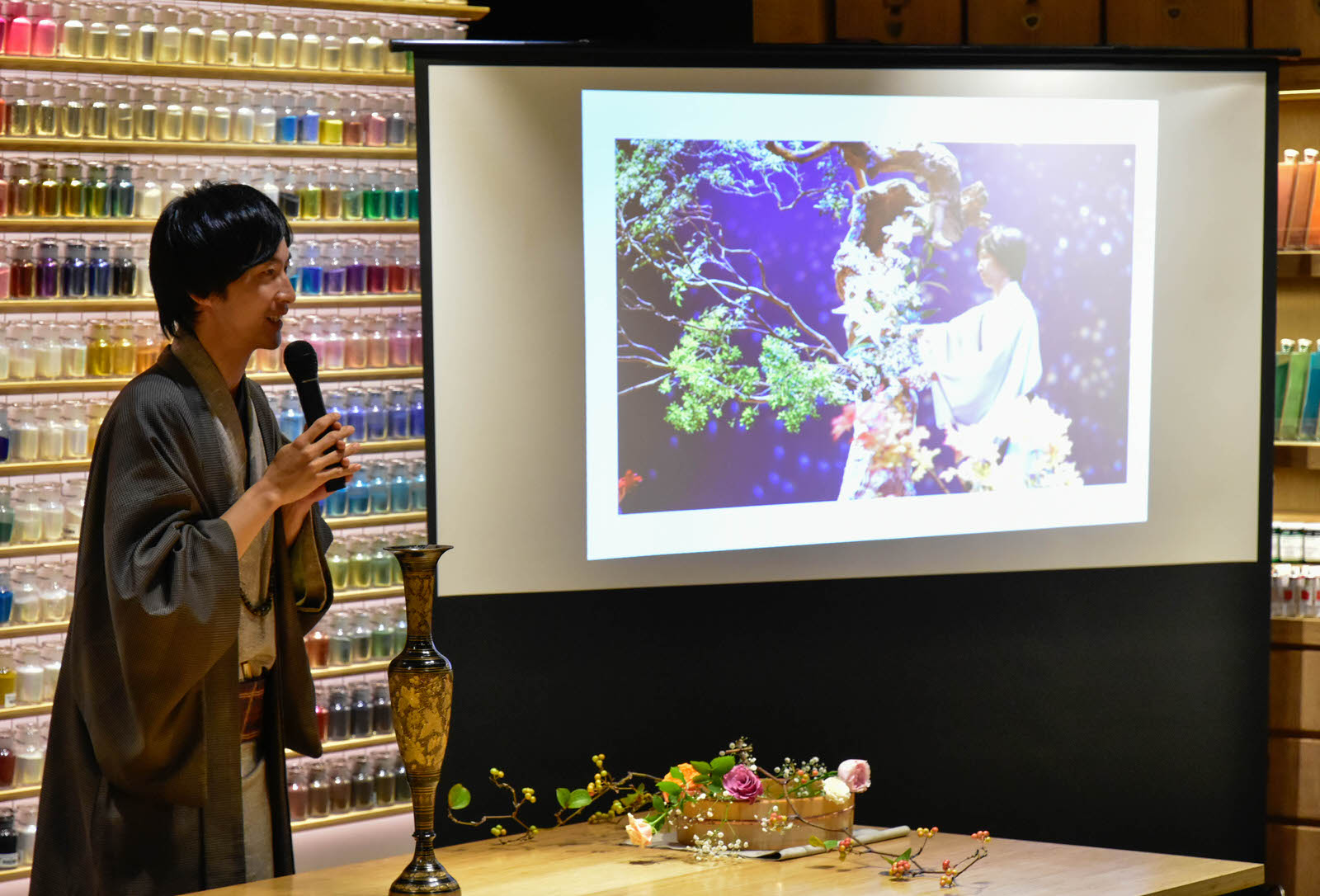 Appeared in the nice autumn-like kimono, the Head gave a special ikebana performance inspired by PIGMENT TOKYO in the beginning of the session.

Beautiful flower composition, created by his delicate movement, has a sense of tension yet was very gorgeous, excited the audience. 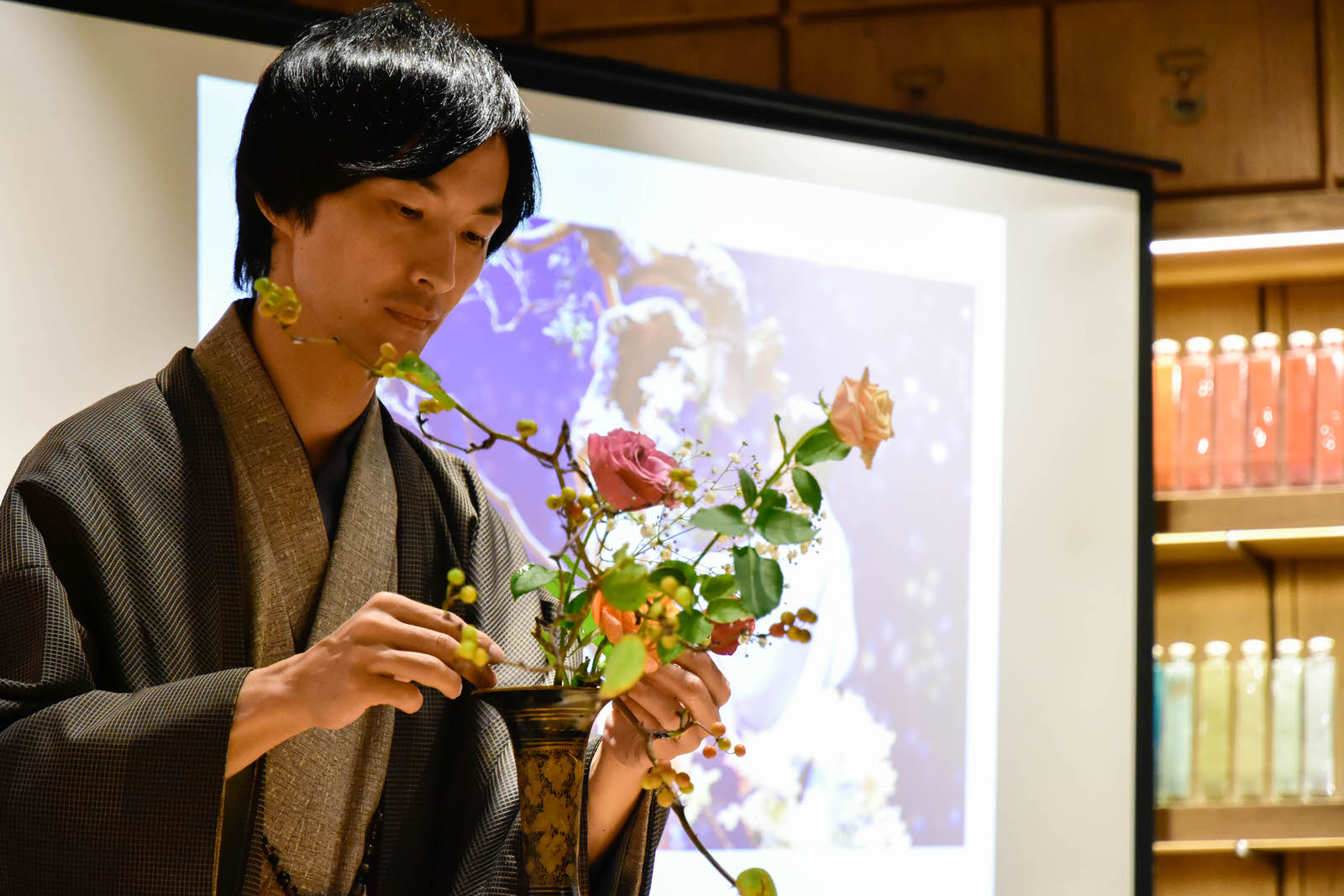 Moving on to the talk session, Iwaizumi asked the question to the Head of the school, “What is the standard of “beauty” in Ikebana?”

He answered, “Many people think that creating Ikebana only requires sensitivity, but what is more important is a logic.” and he gave a comprehensive explanation of the origin of the art Ikebana, and the history of aesthetics that has been handed down from generation to generation. 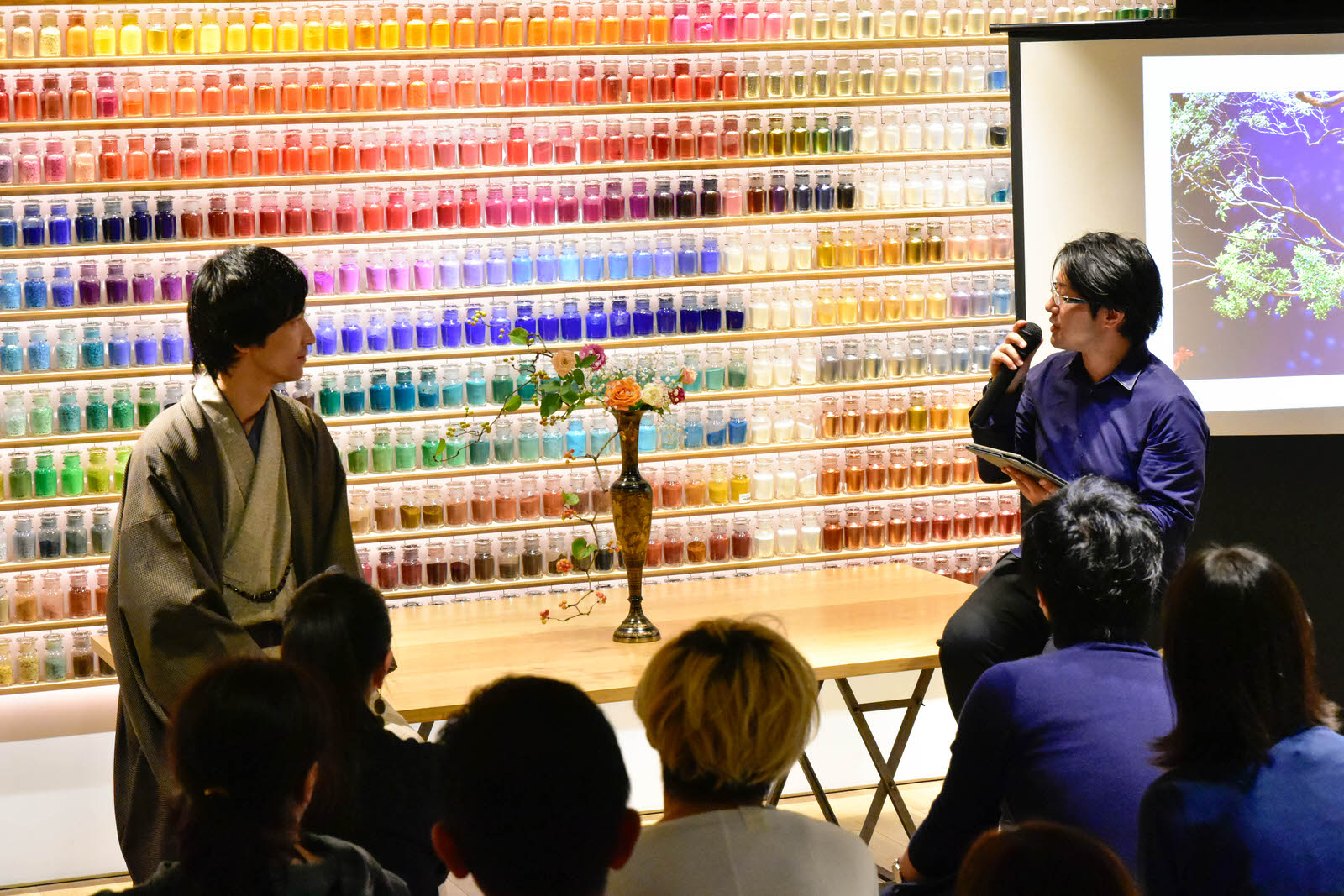 In addition to that, he mentioned that it is important to draw the greatest common aesthetics and to experience them through rich and varied discipline. “Because in order to create something new, it is important to learn from history that our ancestors have created”, he said. 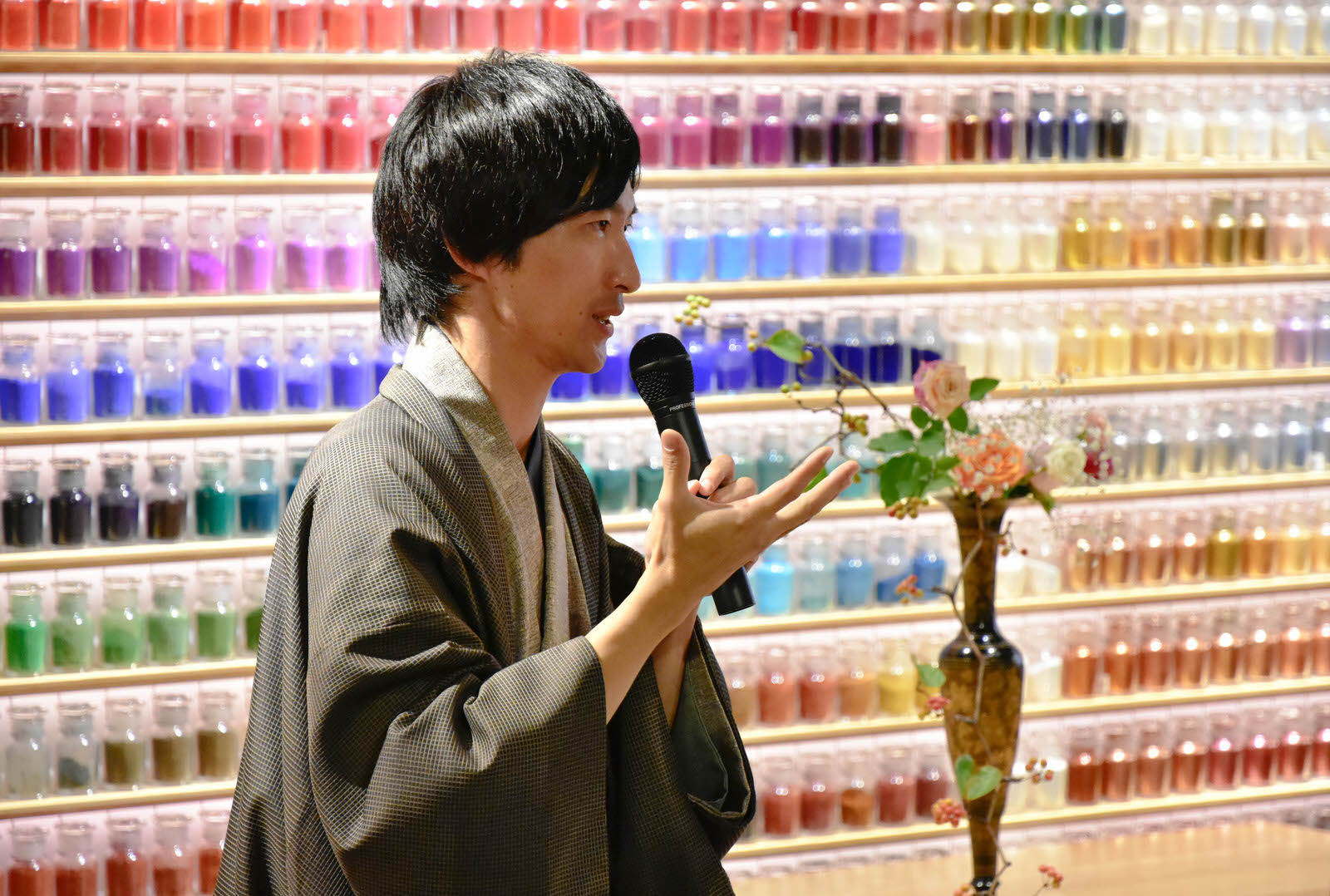 In the middle of the session, we appreciated his work through the presentation slides and heard the concept and behind-the-scenes stories. While it is based on the “model”, as he mentioned in the beginning, his work is very modern and edgy at the same time and it was all attractive. 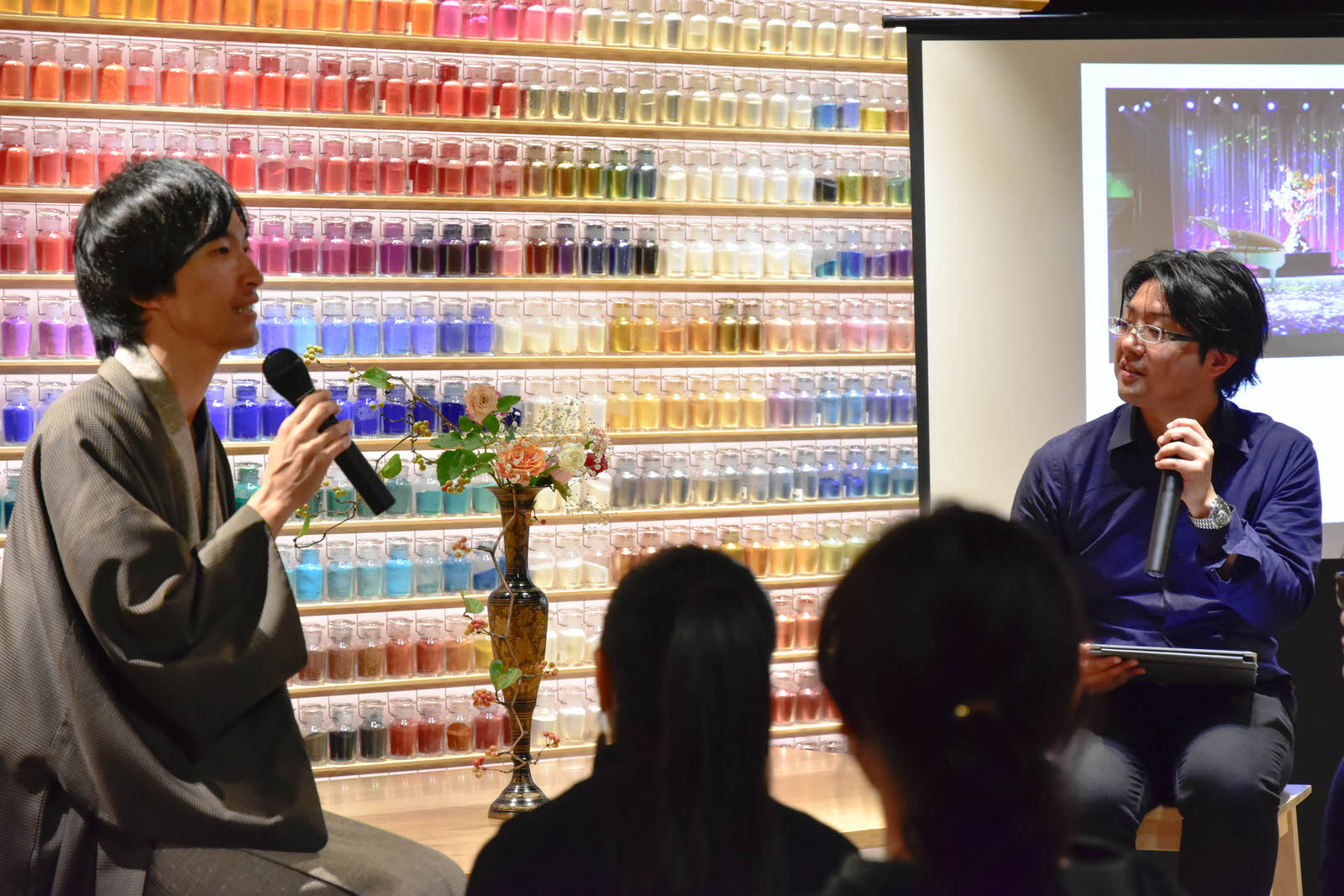 Lastly, Iwaizumi asked the question to the Head; what is “color” to you?

“Well, I consider color as the synonym of “designing”, he said. “What I mean by that is color is not interesting if it were only simple. I would say, it has literally, “no color”. By producing “distortion” in chord, the true beauty as color can be created. In this sense, for me, color is something that creates “distortion” to finish the talk. 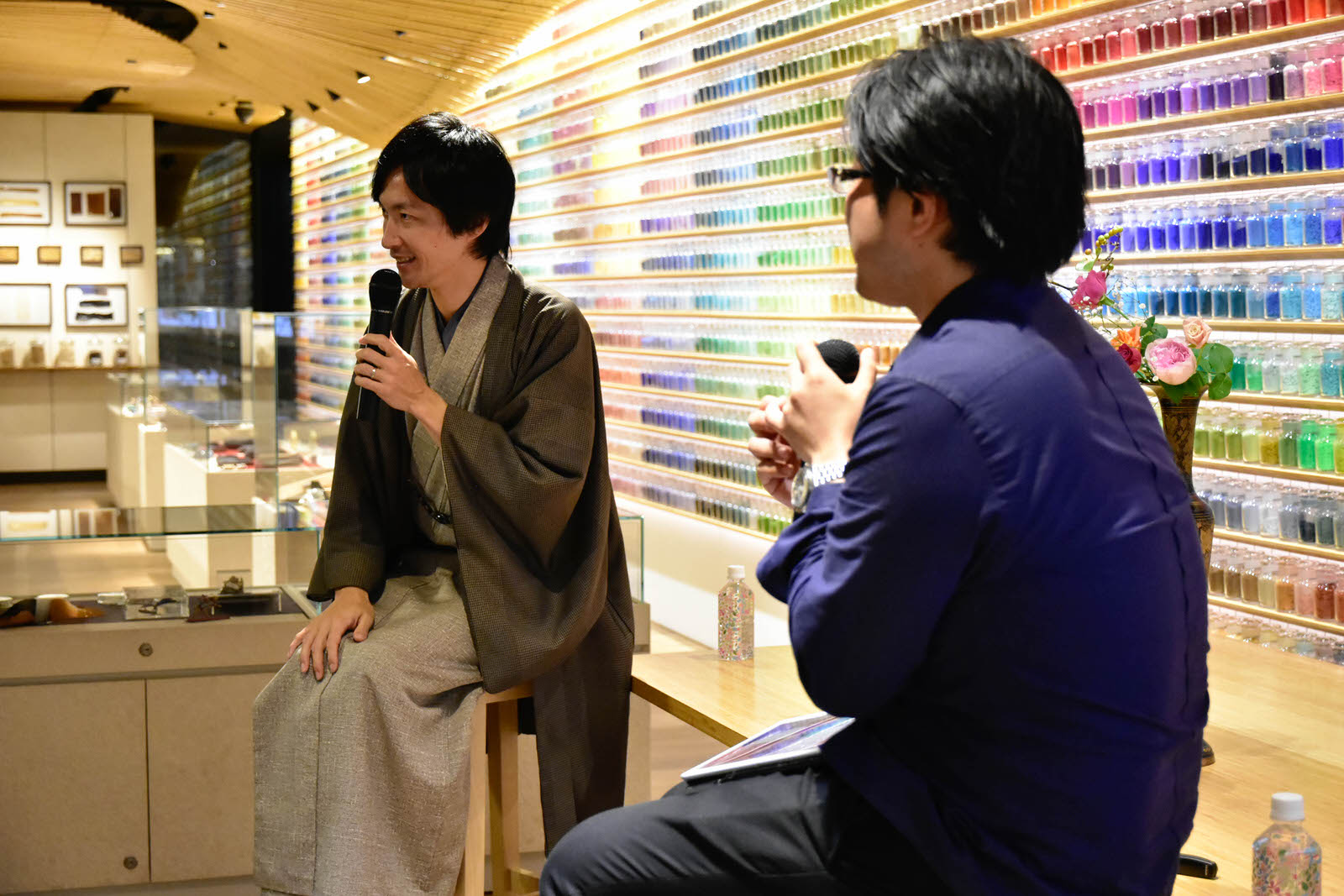 Head of the Mishoryu-Sasaoka Ikebana School Born in 1974 in Kyoto Graduated from the Faculty of Engineering of Kyoto University (Master of Engineering, School of Architecture) From the age of three, Ryuho Sasaoka received ikebana instruction from his grandfather Kunpo Sasaoka, succeeding him to become the 3rd head of the school in 2011. He is well known for pioneering the potential of ikebana as a performance art, creating arrangements before live audiences at major events in Japan and overseas, including the ceremony to commemorate 150 years of diplomatic relations between Japan and Switzerland, which was held in Neuchatel, Switzerland in 2014. He also supervised the flower arrangements for the venue of the G7 Ise-Shima Summit in 2016, which was attended by the heads of state of several nations. Photo by Yasuo Kubota (STUDIO BOW) Fujin Gaho (Hearst Corporation), January 2013 issue

Our next PIGMENT COLOR PHILOSOPHY Vol.2 invites Mariko Nishimura, a representative director of HEART CATCH Inc., to explore the relationship between business and art. We hope that many of you will be able to join us. 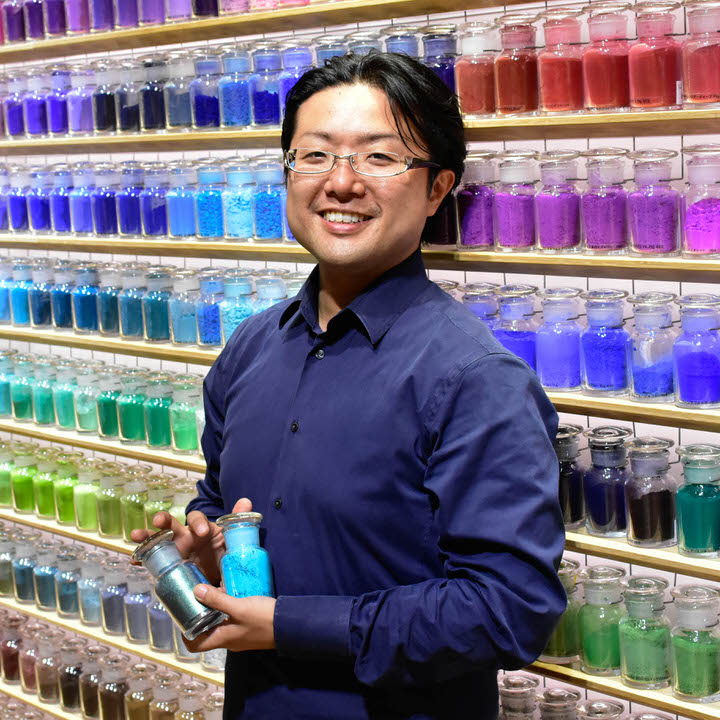