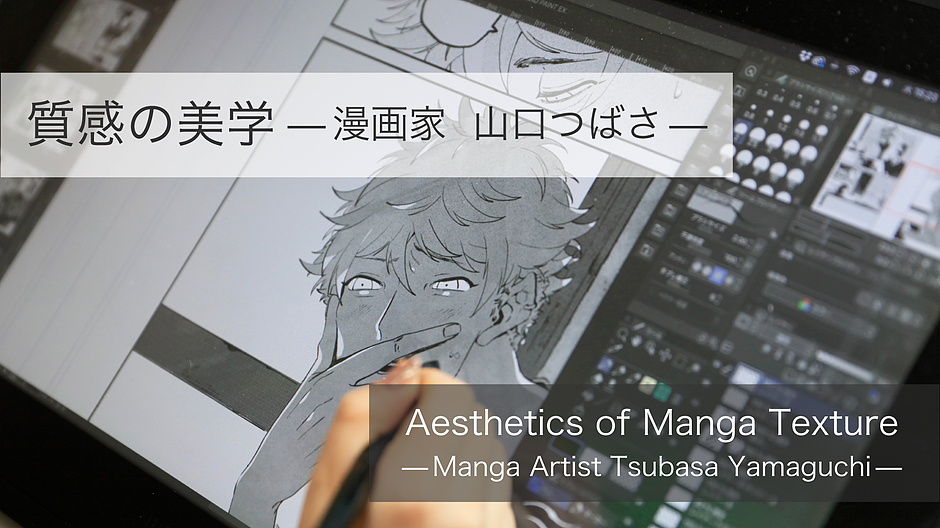 The "Blue Period Exhibition ~ Art is a Gift ~?" to be held from June 2022 is an exhibition that will stimulate not only our visual sense but also our emotions and feelings through paintings from the manga "Blue Period" and a film screening in an immersive theater.

The manga artist Tsubasa Yamaguchi, who has been a close friend of PIGMENT TOKYO over the years, will be in her studio to talk about her drawing styles and thoughts on creating manga artworks. 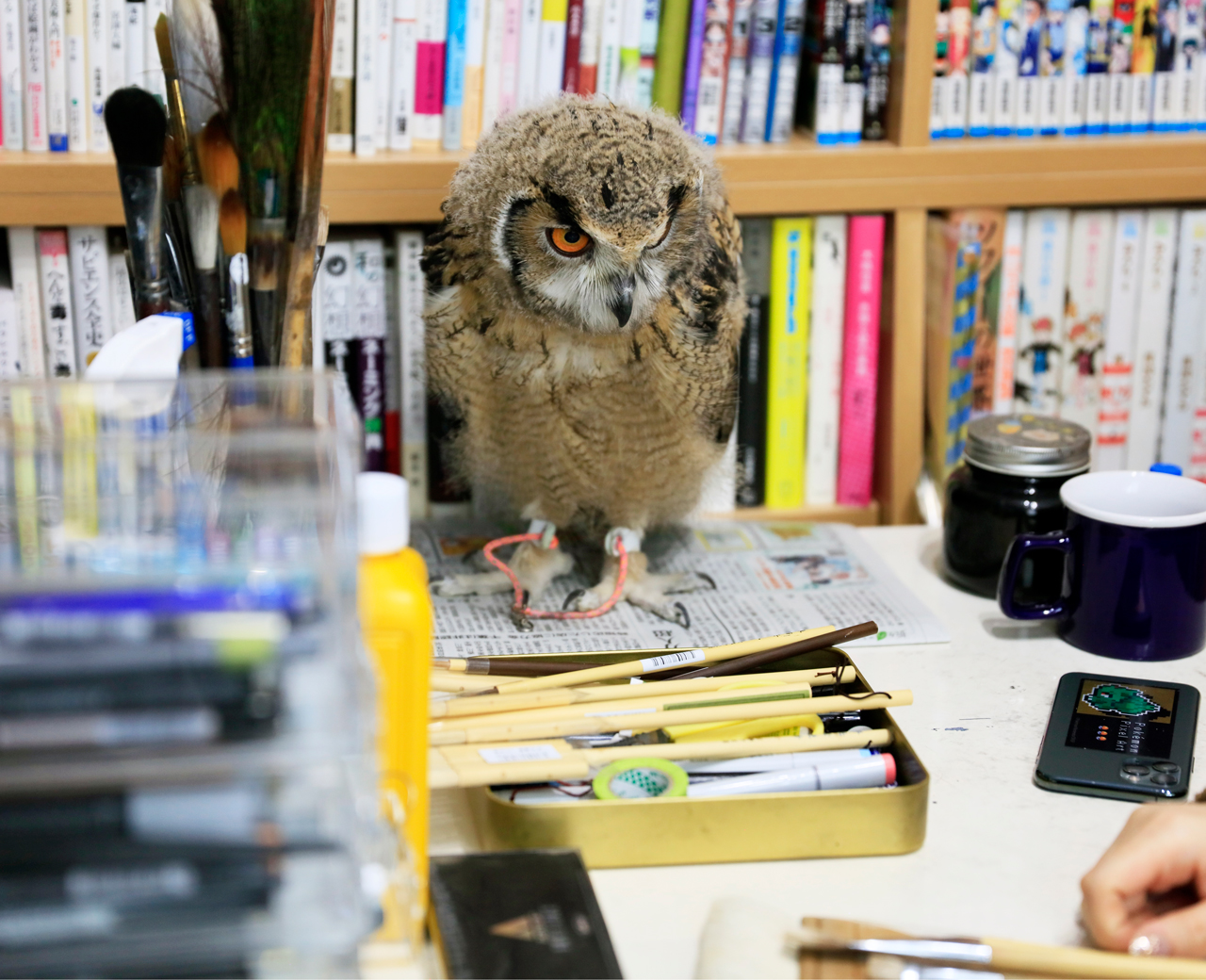 Brushes, pens, ink and other art materials are lined up on the desk where she does her work. The Bengal eagle owl named Yoru lives in her studio.

— Most of your manga artwork is created by converting the hand-drawn painting into a digital image. How do you create texture and color gradation when you draw your manga? Also, please tell us what you pay the most attention to during the process?

I used to draw everything by hand, even the screentones.

Blue Period was my first serial work, and before that, I was working on a short series written by Makoto Shinkai, an animation director. In that work, all the visual works were hand-drawn and very time-consuming.

I had to convert his artwork into my drawings, so I had no choice but to switch to digital while working on it. On the other hand, I think it is nice to be able to express something that only digital can do.

For example, I can now carefully apply noise tones and create layers.

— Are the screentones only painted digitally?

Yamaguchi: Yes, I use digital only but I try to make the screentones look more watercolor-ish so they won't feel too monotonous.

I dissolve Sumi ink in water and paint it on paper, then scan it in, and later create the screentones using Clip Studio's toning function.

I try to make sure that the screentones don't become too obvious in the images and since it's a story about becoming a painter, I add a watercolor touch to my artworks to match the paintings that appear in the story.

— So that's how you use both digital and analog. Do you often use Sumi ink?

Yamaguchi: I make about five sheets of screentones with Sumi ink and use them all the time in different ways. 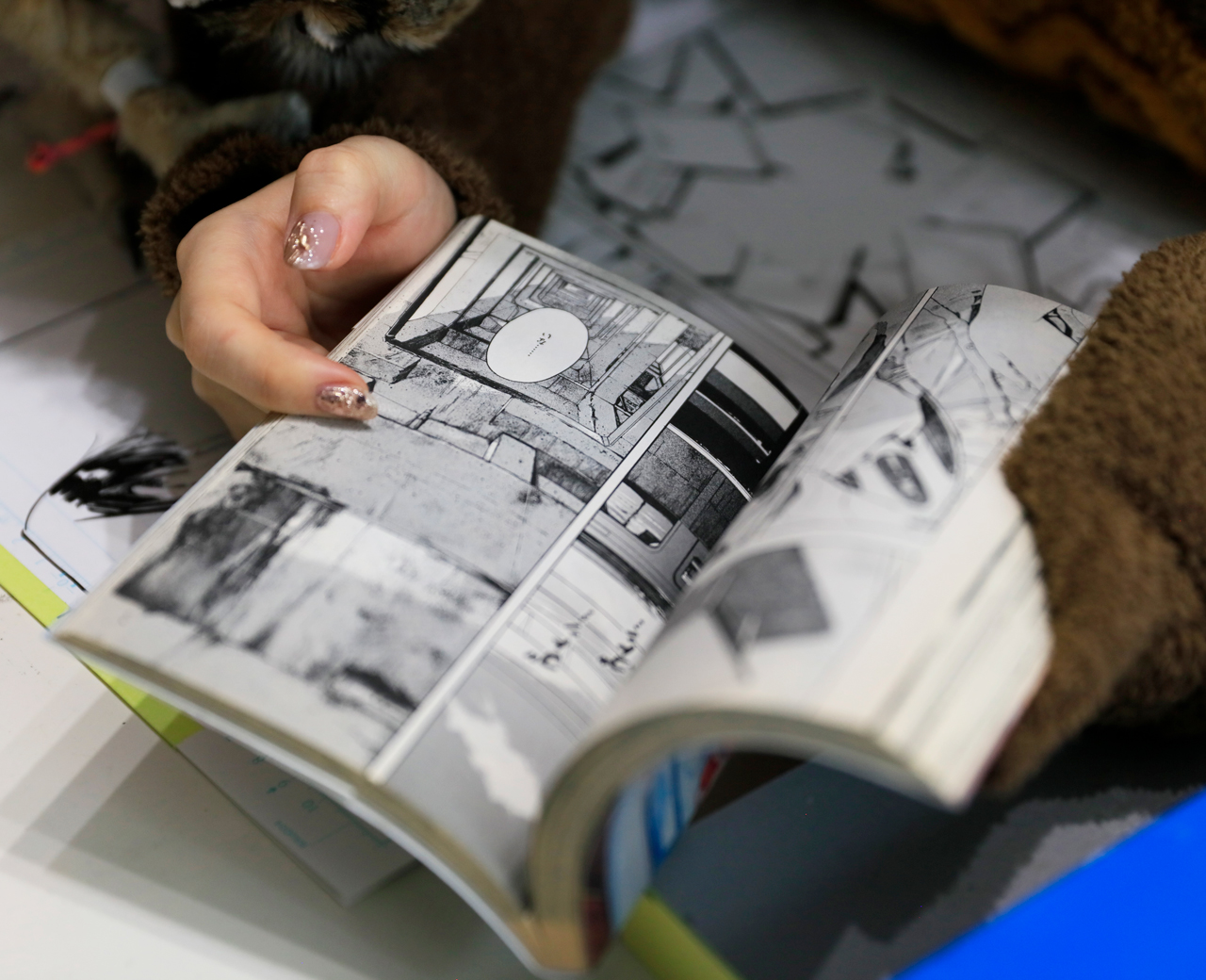 — I know there is more use of digital these days but I’m happy to know that there are still things that can only be achieved by hand-drawing.

Yamaguchi: Thank you very much. Although digital is still convenient, isn't it? There are more and more good things in digital as well. I wish I could combine the best parts of digital and hand-drawing. 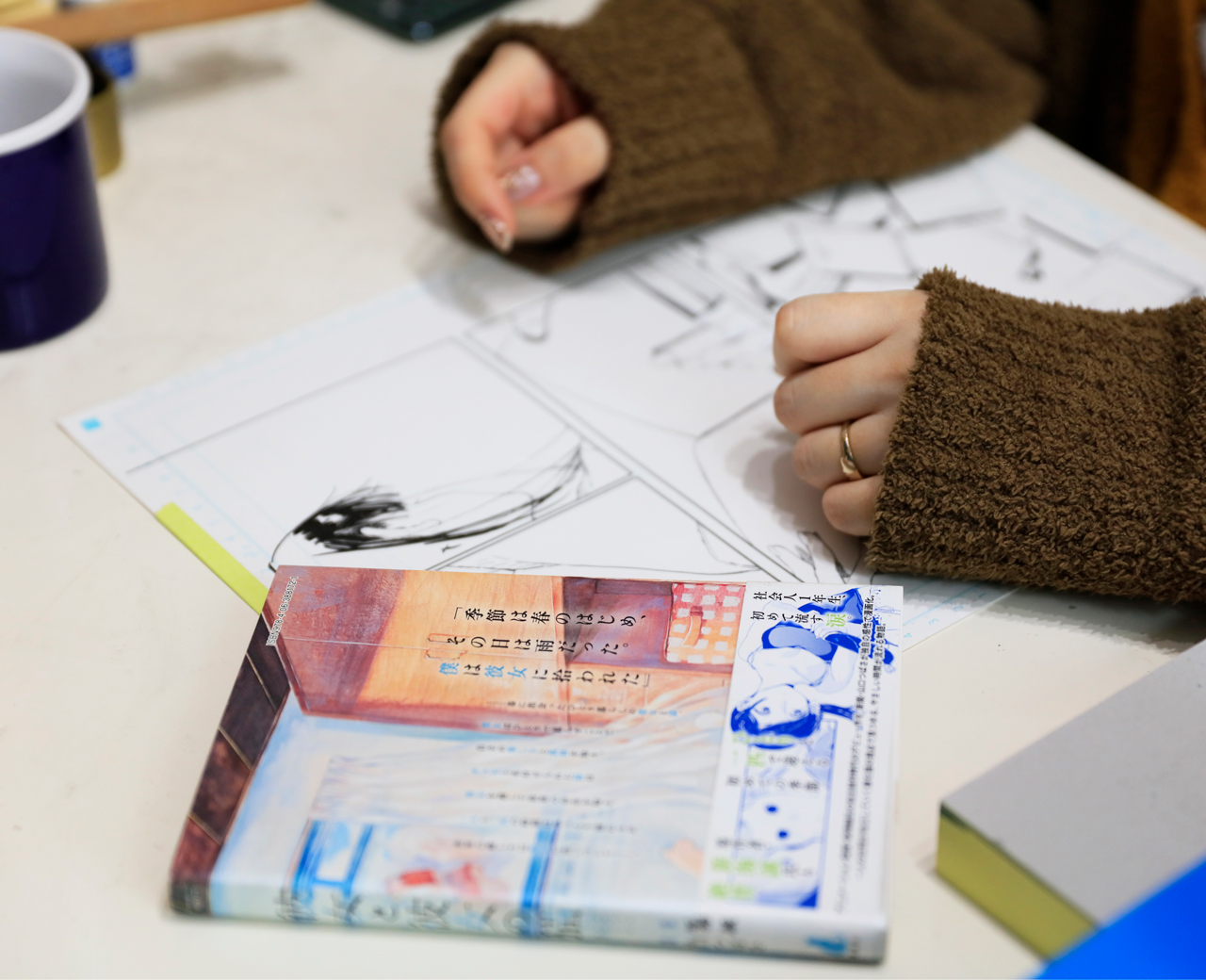 Yamaguchi explaining her hand-drawing method and the techniques that she commonly uses.

"She and Her Cat" by Tsubasa Yamaguchi, original story by Makoto Shinkai

Yamaguchi: I used to scrape the drawing paper in the early days of my hand-drawn manga works.

When I was working on "She and Her Cat," the original story written by an animation director, Makoto Shinkai, all the images were created in analog.

I also used ink spattering and other techniques.

— So that is what we think of as techniques used in painting.

Yamaguchi: I tried to apply the techniques I learned during the training days before applying for art school and make use of the painting materials that I found interesting.

For example, I made a difference by painting with white and scraping off,

so it created more depth in the space during the snowing scene.

Even though probably no one will pay so much attention, I drew this area softer to make it airy.

— I also read "She and Her Cat" and was surprised to know that it was based on a story by director Makoto Shinkai.

Yamaguchi: Thank you very much.

I worked much harder on the pictorial expression at that time because I thought this manga should be impressive in terms of Mr. Shinkai's scenes of capturing the landscapes, the seasons, temperature and the way the sun sets.

When I was working on it, what’s in my mind was that I had to create visual works that can live up to this manga, otherwise I might ruin it! 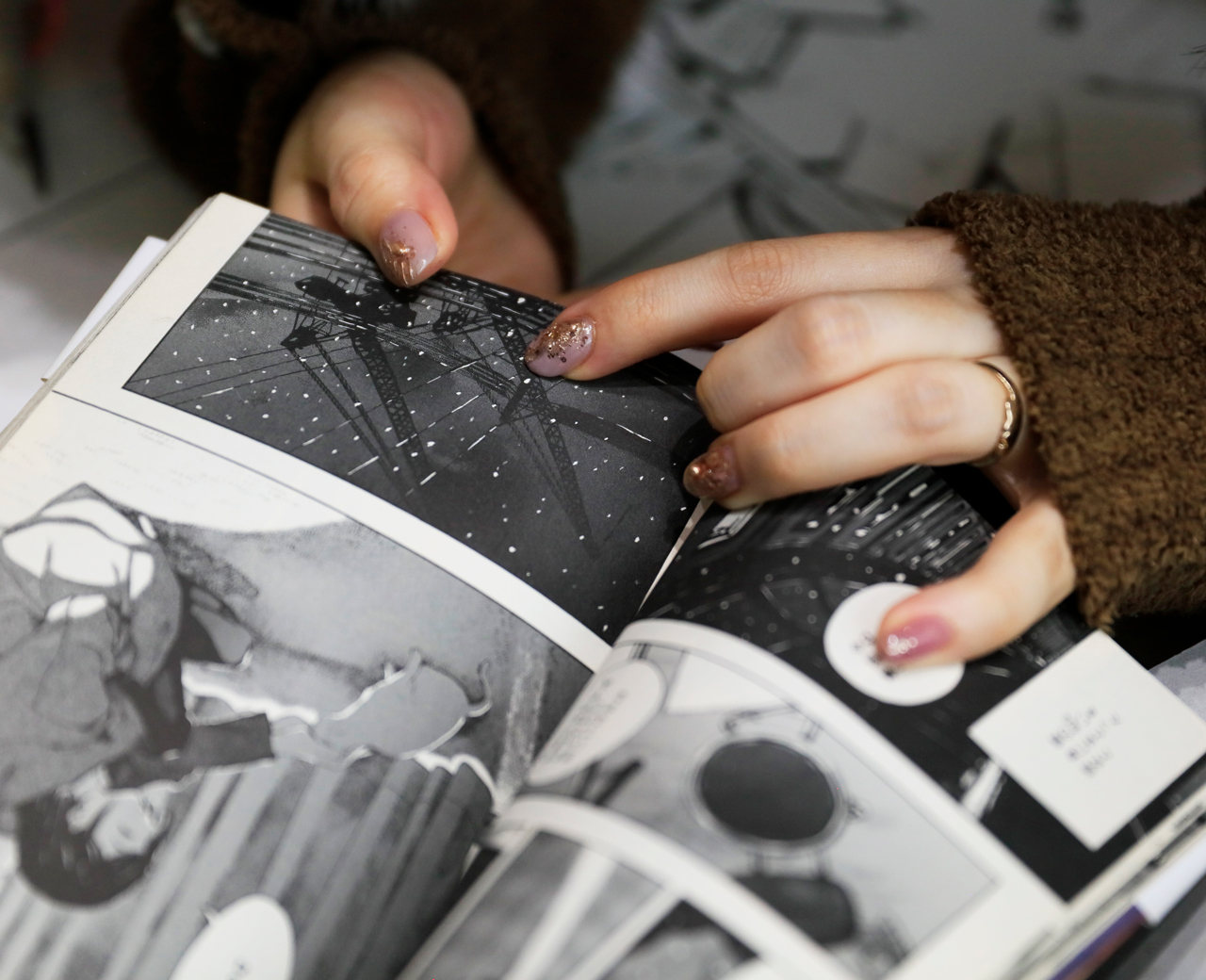 The area she scraped the paper off and drew in with white to create snow and depth in the space. (From "She and Her Cat")

— Do you have an "aesthetics of materials and textures" that you consider is important in your creation?

Yamaguchi: There are manga artists who think about this thoroughly, so it may not be such a special thing, but when I draw screentones, instead of simply creating layers, I’m more into bringing out the full potential of the color gray compared to other artists.

For example, when I layer the screentones, I use grays with slightly different meshes to make the color darker, or I pay attention to the differences in black and meshes to make a contrast.

— How do you make a difference in grays?

Yamaguchi: I use the same noise tones but slightly change the way they are layered so that the color tone changes.

Other artists often use the same dots to create density, but in my case, I mostly make it darker and create nuance with the mesh. Sometimes I also use a plaid pattern instead of noise tones.

I try not to show too much monotony of dots and tones.

— I thought that the shading and gray tones were beautiful while I was reading "Blue Period," so by hearing your story, I finally understood why I got the impression.

Yamaguchi: Oh, I'm glad to hear that! I believe that perhaps it is a matter of the sensitivity of readers.

When I posted the first episode of Blue Period on Twitter, there were several people who said, "I thought the manga was in color the whole time, not when I read till the end to realize it has always been in black and white".

Perhaps it was because of that kind of layering or watercolor-like expression that made them think that way.

— I actually had the same impression! Since I subconsciously had these images in color and when I looked at it again recently (after some time), I thought, "Oh, they were gray!”

Yamaguchi: Yes, I get that a lot from my readers. I think this is the thing that I pay more attention to than other manga.

— After hearing your story made me want to read it again! 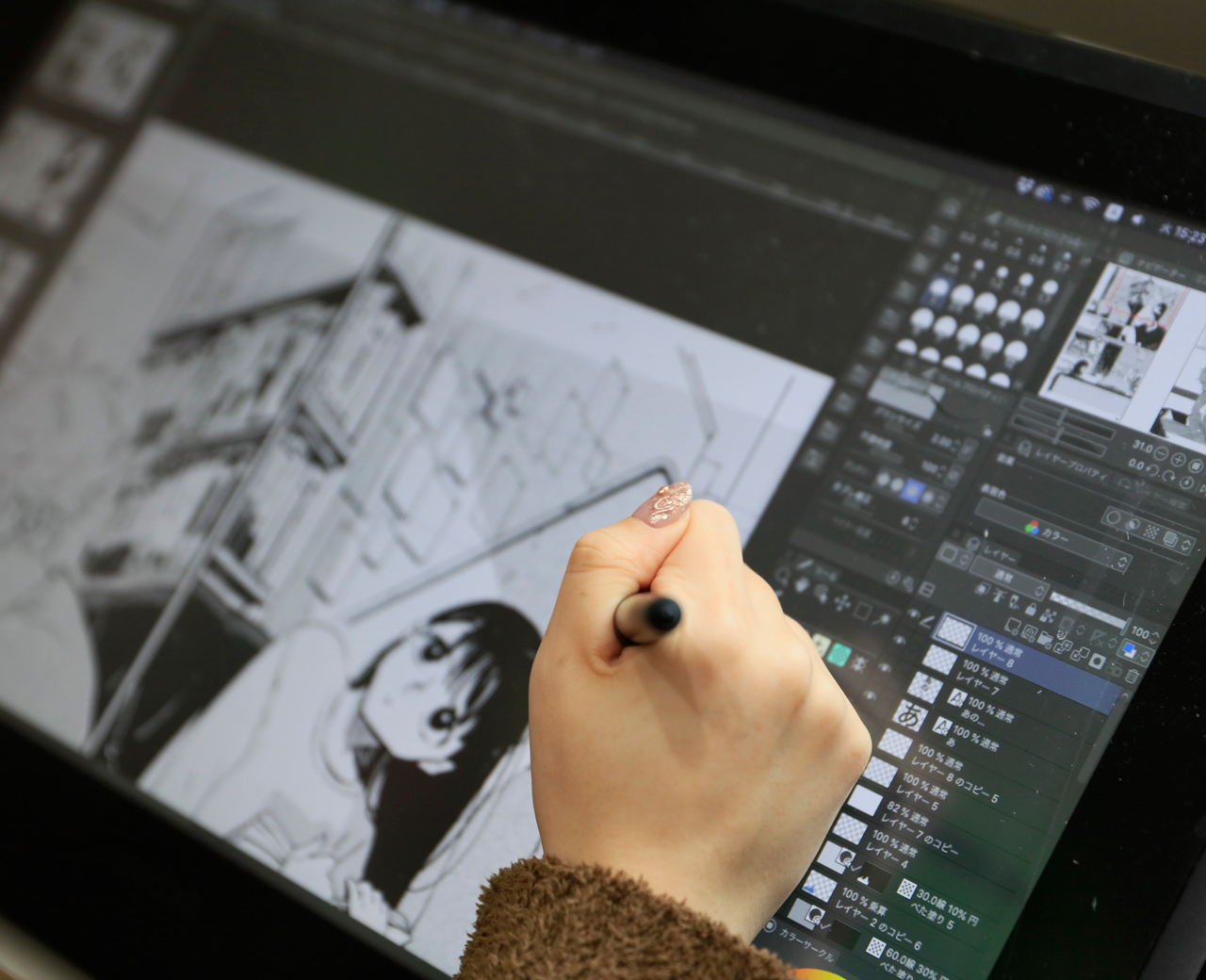 "Blue Period" is a manga that was created with Yamaguchi's own method of drawing, taking advantage of both analog and digital.

Her expression of the pictorial space, consisting of the beauty of shading, which can be captured only in a monochrome world, must have been born not only from Yamaguchi's sensitivity and technique but also from her passion for her manga works. 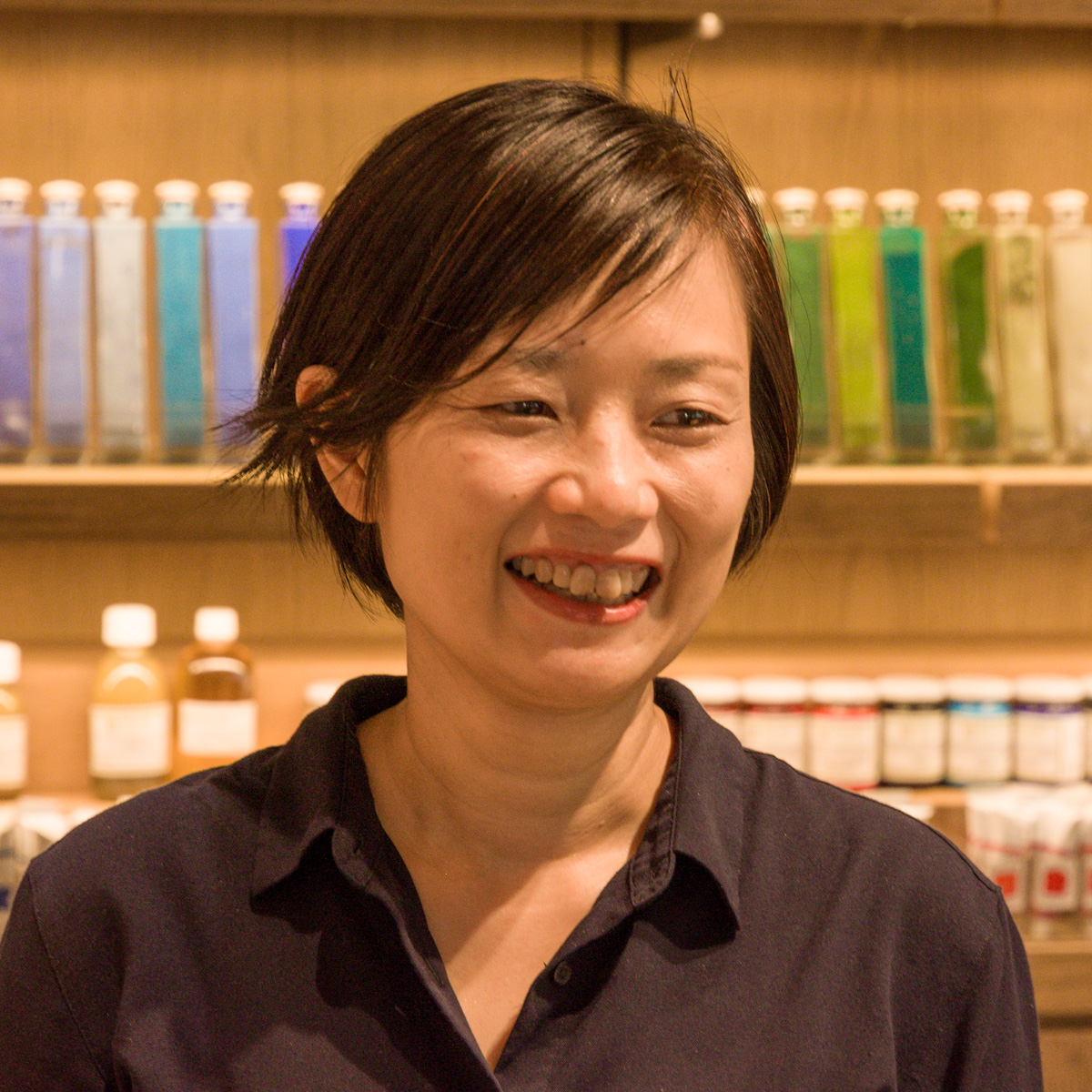 Art Materials Expert at PIGMENT TOKYO Graduated from the Textile Design at Tama Art University. While she works as an art material expert at PIGMENT, she also continues her career as an artist of original paper, Japanese paper and calligraphy.

Art Materials Expert at PIGMENT TOKYO Graduated from the Textile Design at Tama Art University. While she works as an art material expert at PIGMENT, she also continues her career as an artist of original paper, Japanese paper and calligraphy.